If you are looking at this listing, I am assuming that you already know all about Harley Davidson’s new Sportster S. The Harley-Davidson Sportster S may come from a long line of Sportster models, but this version is a complete & total departure from previous generations.

‘Red Hills Rods & Choppers is very happy to offer you this ‘As New’ 2021 Harley-Davidson Sportster S motorcycle! We purchased two of these new motorcycles when they were first announced, so we are selling one and keeping the other one. This particular bike is finished in Vivid Black (is there any other color to consider?), and has only 13 miles from the pre-delivery inspection, and then driven once from the transport truck to our dealership showroom. The 2021 Harley-Davidson Sportster S represents a seismic overhaul of a long-lived family of bikes reaching all the way back to the ‘50s. The previous bike, the Sportster 1200, could trace its heritage all the way back to the Model K, w/ the most recent version having received a steady stream of updates since the introduction of the Evolution engine in 1986. But who cares? That’s ancient history now. What Harley-Davidson have now created is a brand-new bike in every way, that chucks all but the Sportster name in the trash bin. The Harley Sportster S is powered by a 1252cc V-twin engine dubbed the Revolution Max 1250T, and just like the Revolution Max fitted to the Pan America 1250, the engine is a water-cooled 60-degree V-twin w/ DOHC and a VVT system, but it’s also got a few changes. Overall displacement, including the bore and stroke are the same, but there’s a new top end with smaller valves, different velocity stacks and altered cam profiles. The result is 120bhp w/ 92 Ft. lbs. of torque, and an increase in torque elsewhere in the rev range w/ 10% more torque from 3000 to 6000rpm. The results on the road are absolutely awesome!

As with the rest of the bike, the Harley Sportster's electronics have had a huge uplift compared to the old model w/ three riding modes (Road, Sport and Rain) plus two custom modes, as well as cornering ABS and lean-sensitive traction control. All of this is controlled through the 4" round TFT screen, which also houses other functions from the Harley-Davidson app such as navigation, etc. Along with the new dash are heaps of other new features including LED lighting, cruise control, new multifunction switchgear plus the obligatory restyle complete with high-level flat track inspired exhaust. We could go on and on but I am sure that you have done your homework and know what this awesome new bike is all about.

Again, this 2021 Harley Davidson Sportster S is in ‘brand new’ condition in every way and is ready for a brand-new owner! Don’t hesitate because she will not last long! 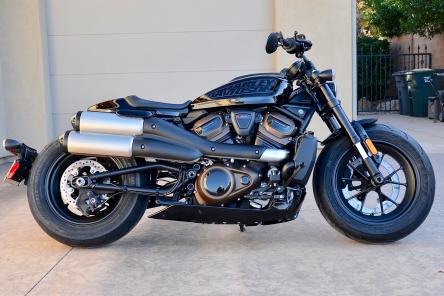 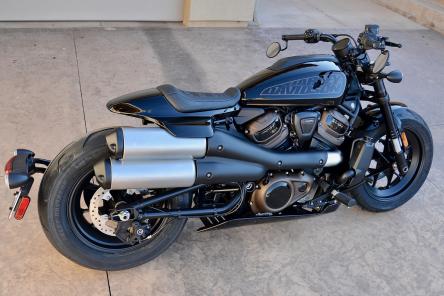